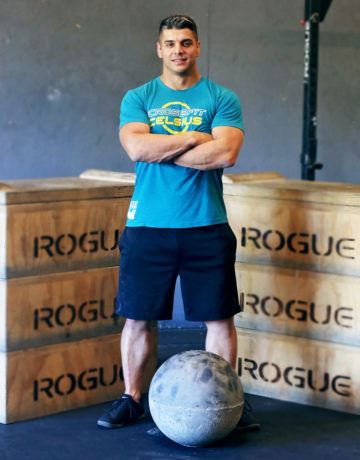 Alex was born and raised in Germany and relocated permanently to the United States with his family when he was 15 and resided in Washington. Eventually, he relocated again to Arizona where he has lived ever since. While growing up, he was very involved in competitive sports – especially swim, soccer and football. He has always been a true sports enthusiast. Alex was introduced to CrossFit by a fellow Celsius athlete that invited him to come try out a Saturday workout and he has been with us ever since. He served in the United States Navy as a Seabee (their Construction Battalion) where he injured his knee while playing football. Since then, he has had recurrent knee challenges and has had to have surgery to repair some of the damage. While his knee brings challenges on some days he finds joy in always pushing his hardest in a workout. Alex enjoys programming workouts that encourage any person, regardless of injury or limitations, that they too can CrossFit.

Alex has found a true passion for the sport of CrossFit. He was lucky enough to even meet his wife at Celsius and now coaches alongside her as well as many of his closest friends. Since beginning CrossFit in 2011, Alex has always had an interest in eventually becoming a box owner. He was ecstatic to get that opportunity at the box that he considers home when he joined Coach Ryan Sund as a Co-Owner of Celsius in 2016.

One of Alex’s favorite part about CrossFit Celsius is the personalized experience that we provide to our athletes. We take the time to talk to and get to know each athlete on a personal level. We understand their goals, their limitations, and work with them on an individual level to help them get the most out of their workouts.