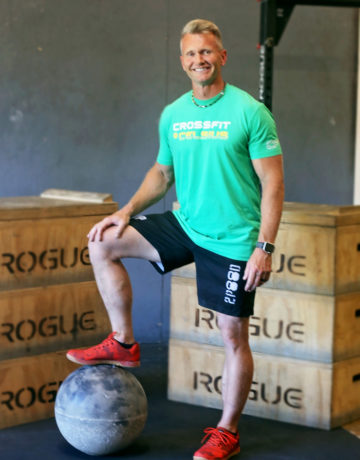 Ryan was very reluctant to try CrossFit back in November of 2010. His wife had her very first 5K run and it was going to be held at CrossFit Fury in Goodyear. The very first time seeing a CrossFit box was when he was cheering on his wife for her 5K Run. He was a little puzzled because he saw a whole bunch of people in extremely good shape but there was not much equipment inside the gym. His wife started right away at Fury and he chose to keep on going to Lifetime Fitness. It took her about a good two months to get him to come in and try a class at Fury. He still remembers that first class. There was probably 10 to 12 people in that class and it kicked his butt. He remembers being one of the last people to finish. However, after that first class, he was hooked right away and has never looked back. He thought coming from a marathon running background to working out 6 days a week for 2 hours a day that he was in shape. Boy, was he wrong.

At that time, Ryan owned two successful limousine companies here in the valley, but was really getting burnt out with the industry. So, a year later, he sold his limousine companies and opened CrossFit Celsius in October of 2011. There has been so much joy in opening the box in Surprise. He is surrounded by the greatest group of people who would do just about anything to help each other out.

Coaching athletes is so rewarding on so many levels. At Celsius, we strive to perfect movements patterns and lifting technique so that an athlete may continue to CrossFit throughout his or her entire life. Ryan finds so much fulfillment in coaching an athlete to find his first, let’s say muscle-up or double under. His passion also lies within coaching proper nutrition and rest habits to ensure maximal athlete potential and recovery. An athlete’s time spent at a CrossFit box is only about 4% of his or her hours in a week, so what that athlete does outside that time frame is critical to his or her success.